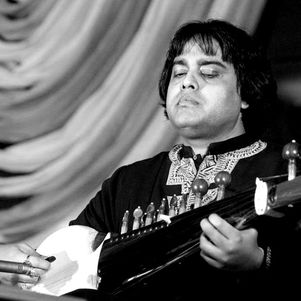 ﻿﻿Pritam Ghosal is born into a musical family. Pritam’s first lesson on Sarod started at an early when he came into contact with Shri Pranab Naha a noted Sarod player in Kolkata. After three years of Taleem, Pritam was very fortunate to have received blessings from the Great Sarod Maestro and Visionary Ustaad Amjad Ali Khan Sahab. In 1995 He accepted Pritam as His disciple. From then, Pritam has been extremely fortunate to be graced by the extensive Taleem and Guidance not only towards music but also towards leading a meaningful life, from his Guru. With His blessings Pritam has been also fortunate to have received excellent chance to perform in several music concerts in India and abroad as well.

2.  He was invited to perform as a guest artist at the Annual Programme of Sankalp, Meerut.

6. Sisir Manch, Kolkata at the inauguration of the autobiography by Late Pandit Buddhadev Dasgupta

15. Duet with Lalitha Veena Player Shri L.R. Vishwanathan at 'NatNaagar' an evening of music and dance decorated to felicitate Pandit Krishna Mohan Misra on his 60th Birthday at Kamani Auditorium.